This work was part of a mentorship group-installation titled Hollywood (Tanya Poole), Nollywood (Nomusa Makhuba), Bollywood (Lindi Arbi). As an art maker, I decided not to interrogate Bollywood’s preoccupation with fantasy and romance, but rather to indulge in it. Both the content and process of this project allowed me to use all manner of materiality. I used spices, jewellery, nail polish, gorgeous cloth, glass paint, glitter, stars and sequins, and the colors that are used in the Hindu Festival of Holi Colours with unadulterated joy and abundance. I have combined these materials with more traditional artmaking processes and have included casts of my children’s hands and faces in polyurethane and resin as a metaphor for honoring traditional family values.

Pillars are vertical supports in architectural structures, often triumphantly decorative. I deliberately made this installation awkward, visually interrupted by block-like shapes. Likewise, the industry of Bollywood film is built on embellishments of family values, love and tragedy but it is nevertheless an assembled variety of differing cultural practices precariously placed together. 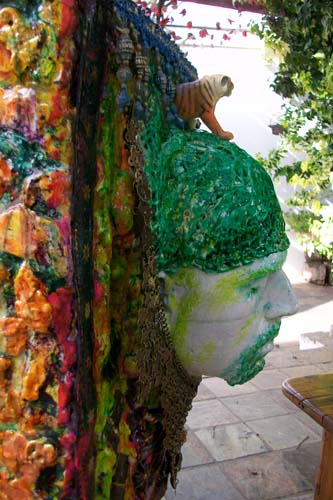 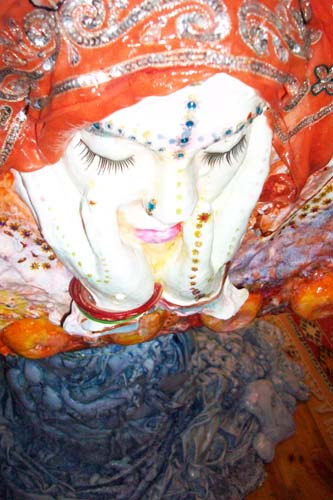 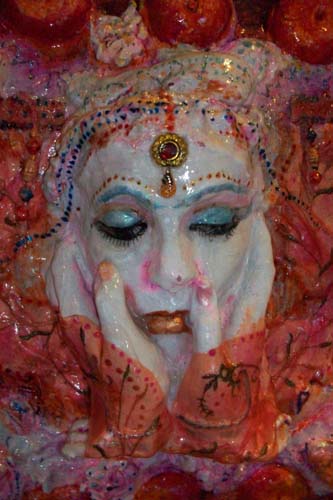 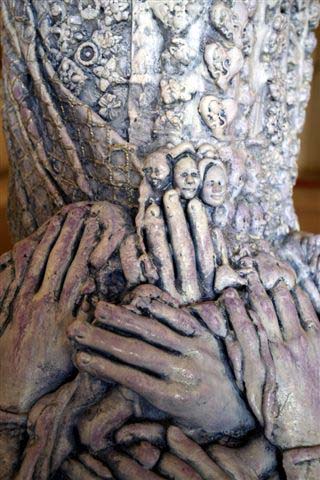 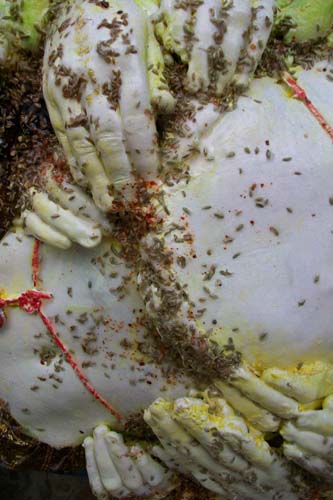 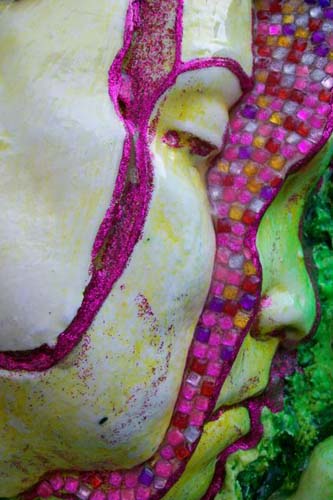 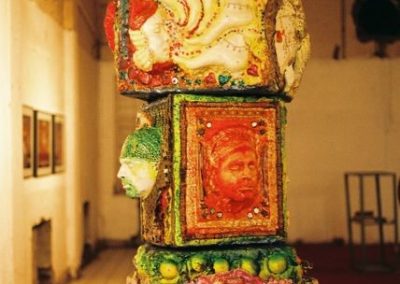 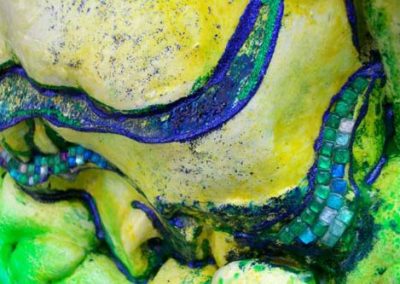 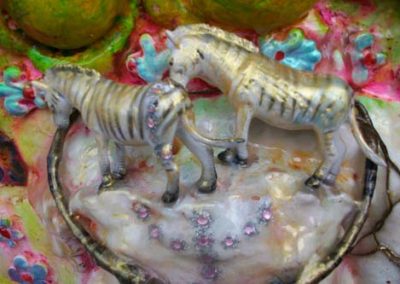 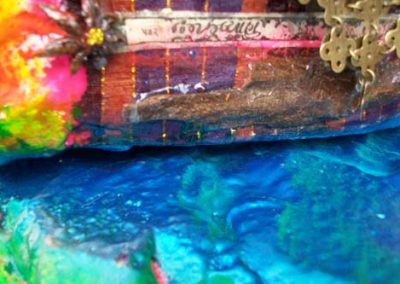 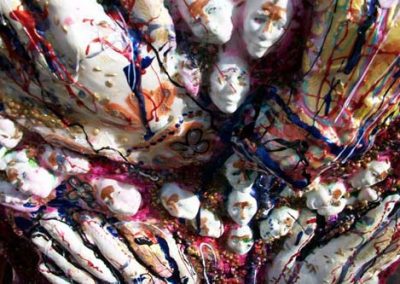 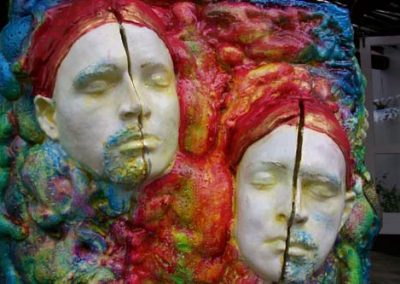 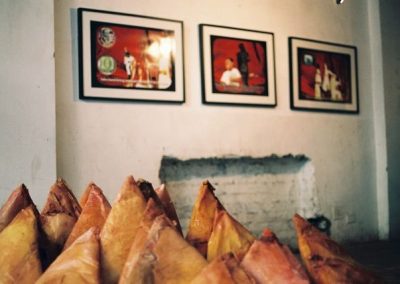 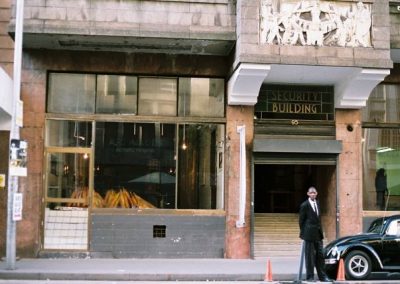 Aware of the outsider’s inaccurate assumption that Bollywood represents all that is Indian, I searched for an intertextual thread existing between such a variety of difference in this rich mix of life in film. Drawing on the parallels between food and film, as both are modes of instant gratification, the samoosa seemed the most obviously delicious object to unfold. The triangular-shaped pastry is definitively associated with the Indian community in Southern Africa and serves as a common denominator across vastly differing religious practices, which often have strict rules about food.

This idea, after much trial, eventually separated into two installations – a pile of 36 too-large-to-eat samoosa’s and the adorned blocks, which form a pillar. Both installations offer a sampling or Taste of Bollywood and act as stand-ins for the construction of this glorious industry. In the installation, the samoosas function to index cultural consumption (filled with ‘cast’ of film-icons) and act as currency to the delusion that we have purchase into the ‘shrine’, – the Indian culture – via Bollywood. The pillars, a celebration of edifice, are detailed with fragments of treasures that this cultural construct is based on. 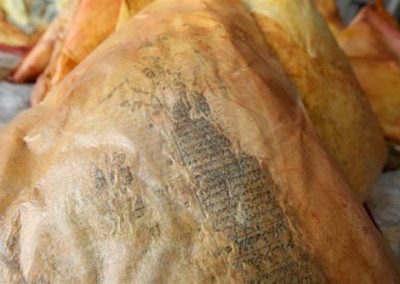 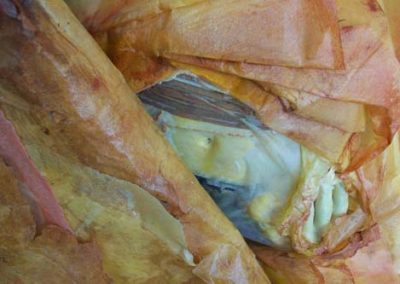 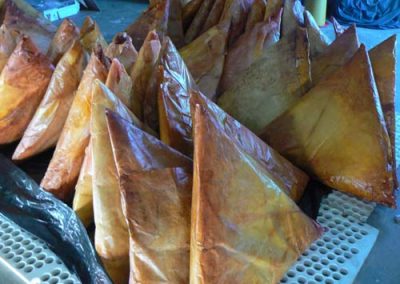 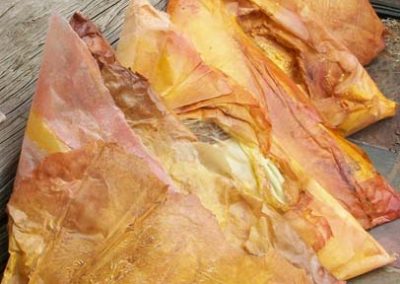 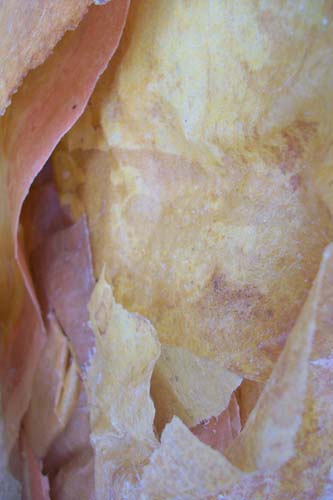